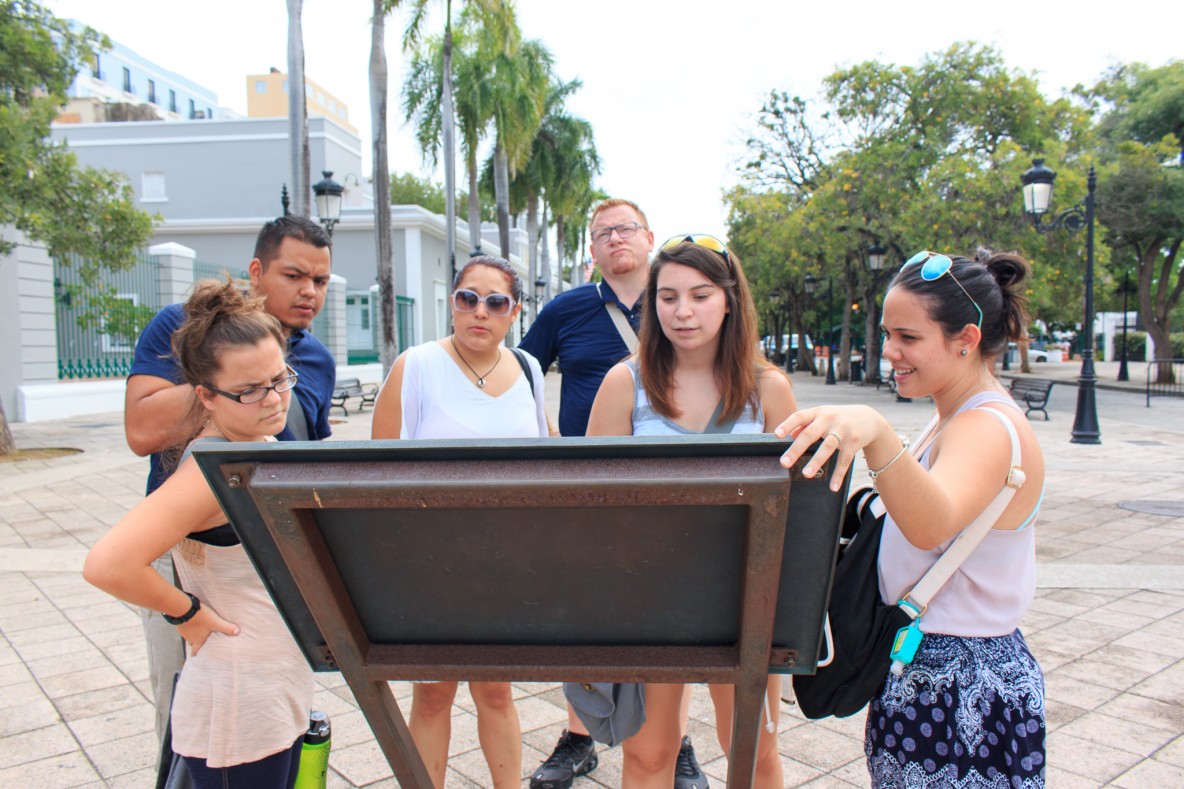 On Thursday, 17 of September, the team enjoyed a day in Old San Juan. The first stop in the itinerary for the day was a tour of the Governor’s mansion or, as the locals know it: La Fortaleza (The Fortress). La Fortaleza is the current official residence of the Governor of Puerto Rico. It was built between 1533 and 1540 to defend the harbor of San Juan. The structure is also known as Palacio de Santa Catalina.

La Fortaleza was built, after Spain realized the need to defend the San Juan Bay from foreign attacks. Its central structure was made up of four walls arranged around a patio. Two circular towers faced the sea from the northern and southern ends. The stone structures had to be rebuilt after they were destroyed in a fire during the Dutch attack of 1625. La Fortaleza served as a military fortress until 1845, when its interiors were remodeled and its main entrance façade was rebuilt in the neoclassical style, acquiring the palatial presence it maintains to this day. The building functions as the Governor’s residence, making it the oldest executive mansion still in use in the entire Western Hemisphere.

Following La Fortaleza, the next stop was a walk around the fort that surrounds Old San Juan. Castillo San Felipe del Morro, (El Morro) sits atop a high promontory overlooking the entrance to the San Juan Bay. It is the result of the efforts of Spanish engineers over a period of more than 250 years, and is one of the largest fortifications built by the Spaniards in the Caribbean.

The colleagues stroll along the lawn near the beautiful cemetery, where many locals fly kites, have picnics, and play soccer. The landscape is beautiful, and the view towards the blue ocean is simply breathtaking. The colleagues enjoyed a picnic lunch at the lawn, and then a quick stop at the Catedral de San Juan (San Juan Cathedral). Built in 1540, and the site where the body of Ponce de Leon is entombed, the Catedral de San Juan is an authentic and rare New World example of medieval architecture.

The trip to Old San Juan could not be completed without a stop at some of the souvenir shops, and then a taste of some Helado del País (homemade ice cream), with exotic flavors of the island, like parcha (passion fruit), Guayaba (Guava), and Coco (coconut), among others. The best way to describe it, is a marriage between a sorbet and Italian Gelato.

Abante International, as always, stressed the importance to the colleagues of engaging a host culture. A portion of that process consisted of discovering the local history and heritage of this marvelous city, San Juan. Global perspectives has always been a hallmark of any well-rounded educational plan.